What Do I Stand For?

In the last thirty days, though, we’ve seen three major idols crumble and fall because of poor choices, lying, and lying about poor choices. In mid-January, Lance Armstrong finally admitted that he doped—but he claimed he didn’t cheat after 2005. He was emotional and remorseful, but he was also a lying cheater. We wanted to believe that Lance was clean—despite the fact that quite literally every other cyclist was dirty—because we wanted an American hero.

A man who overcame cancer and dominated a sport by winning seven straight Tour de Frances. Overwhelming evidence be damned, this man had to be telling the truth because, after all, he threatened to sue people who “slandered” his name. His reactions to accusations of doping were so visceral that he had to be telling the truth. But no, he turned out to be just like the rest of the cyclists. A cyclist who overcame cancer.

A few days later, another idol went crashing to the ground, this one in possibly the most bizarre way possible. Manti Te’o found his way into the hearts of Americans across the nation because of the heartbreaking story of his girlfriend—Lennay Kekua—who was in a terrible car accident, got leukemia, then died six hours after Te’o’s grandma died. Fueled by the terrible losses, Te’o went on to lead Notre Dame with 12 tackles en route to a 20-3 victory over Michigan State, nine more wins and an undefeated regular season, and nearly a Heisman trophy. Except there was one problem: Lennay Kekua never existed. She was a hoax.

The most inspirational story of the college football season was soiled because the Notre Dame linebacker fell in love with a girl over twitter and pretended to have met her and introduced her to his family. That is, unless he was in on the hoax the entire time, which would make him the most histrionic, attention-seeking, twisted player in recent memory. In one moment, Te’o went from sympathetic, inspiration figure to the laughingstock of the sports world, an unenviable mess. 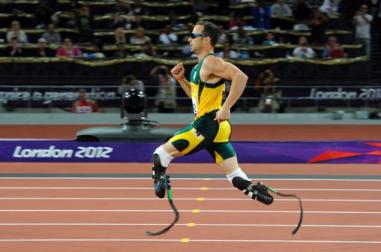 Pistorius appeared in a Nike ad featuring the catch phrase “I am the bullet in the chamber.” The multi-billion dollar industry took all of twelve seconds to take one down.

Then comes the most recent letdown, the sad story of South African Olympian Oscar Pistorius. The man is the first double leg amputee to compete in the Olympics, earning him the nickname “Blade Runner.” His inspirational story touched millions of people—from South Africans to disabled people to sports fans in general—until he (accidentally) shot and killed his model girlfriend, Reeva Steenkamp. The jury remains out on whether or not he killed her on purpose—he claims he thought she was a burglar—but he is forever unclean in the eyes of many people. How can you look up to someone who killed someone they loved, even if they overcame seemingly insurmountable odds to reach the pinnacle of modern athletics?

In the end, it just seems that we cannot trust athletes and look up to them now. Maybe the saddest story of them all is the recent antics of LeBron James. The All-Star forward is trying to get into the good graces of sports fans’ hearts after leaving frigid Cleveland for beautiful Miami in order to better his chances to win a championship by playing the best basketball of his entire life. The shameless James is even working harder than ever to get teammates involved, rebounding at the highest rate of his career, and scored 30 points on 60% shooting or better in six straight games in a sad attempt to raise his image.

In the end, it’s really athletes like LeBron who will do anything for attention that make fans sick and leave us wondering if we should and can look up to any athlete.

Posted on February 7, 2013 by benweinrib

It’s been a solid five months since my last podcast, but I’m really excited about the third installment of The Knuckle Cast. This episode features my interview with Vanderbilt sophomore pitcher Tyler Beede, who was drafted in the first round of the 2011 MLB draft but came to Vanderbilt instead.

As you’ll soon find out, Beede also raps, where he goes by the name Young Beedah. As a fan of Vanderbilt, baseball, and rap, Beede may be my favorite student-athlete on campus.

Luckily, I got the chance to interview the right-hander for a feature I’m writing for the Vanderbilt Hustler baseball preview, which is coming out in about a week. In the mean time, I hope you enjoy the third episode of The Knuckle Cast.