Sure, I wasn’t happy when my Bobcats lost the #1 pick to the Hornets–boy this is going to be confusing looking back in a few years–after they had nearly three fewer wins than the second worst team in the league. But the Lottery disincentives tanking and adds excitement to the league, so it is a good thing.

There are a few things that bother me about the lottery. It’s not necessarily about how the process is done, but rather how people look at the lottery.

Specifically, the magical word “due.”

I’m not sure if people forgot what they learned in high school math (very possible) or if they believe in karma over logic, but this isn’t how odds work.

The lottery is a simple (?) process. 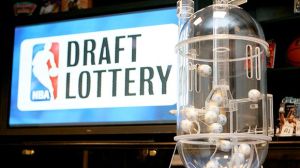 Obviously the Magic will win the lottery because they lost Dwight. Or it’s going to be the Pelicans or future Hornets because they’re changing nicknames. Or the Kings because they won’t be relocated.

Four ping pong balls are continuously drawn until three unique teams are selected. The rest of the picks are organized by record.

It’s all luck. There’s no “due.” And there’s no conspiracy. You can make up a conspiracy theory for any team.

This idea of a team being “due” continues even today–an article ran about it in the Dallas Morning News–despite it making no sense.

Each draft is completely separate. It’s just odds each time.

Imagine using Chad Ford’s Mock Lottery Machine nineteen times, never coming up with the Phoenix Suns first. What is the chance you get the Suns with the first pick on your twentieth try? Is it 80% since they haven’t come up yet so they have to soon? Is it 2% since they haven’t been chosen yet, so they probably still won’t?

Since the lottery was weighted in 1994 so that the team with the worst record has a 25% chance of landing the top pick, the team with the best odds has only won twice. Two out of nineteen is not very good–10.5% is less half the odds of 25%. Yeah, I can do math.

So is the NBA rigging it so that the team with the worst record doesn’t get the number one pick? We can check if that 10.5% actually statistically significant–suggesting the lottery is rigged–or if it is just due to random variation by using a binomial distribution. Who’s excited for some math?!

And in fact, the binomial distribution gives us a p-value of .07, which is bigger than .05 and therefore too large for us to reject the null hypothesis. In layman’s terms, there is not enough evidence for us to say that the lottery is rigged.

Well maybe they’re not just preventing the worst team from winning the lottery, they’re just selecting the first winner because of a narrative. We can check this by running a chi-square test on the lottery winners.

Again, the chi-square test gives us a p-value of .089, which is still to large for us to reject the null hypothesis. We don’t have enough evidence for us to say the first overall pick is rigged.

But maybe it’s not the first pick that’s rigged, but rather all three winners of the lottery. We can check that again by running a chi-square test.

No surprise here, the p-value is very high: .355. Using that data, it’s almost comical to suggest that the lottery is rigged.

I know the last thing anyone wants before they excitedly watch grown men drawn ping pong balls is a math lesson, but this should help dispel any misguided thoughts about tonight’s lottery.