When Profiling is Bad

Ken Rosenthal ran an article this morning that implored the Angels to move Magic Mike Trout back to center field, which is a popular idea. Selfishly, I’d love to see the 21-year old superstar back in center field because he would get to cover more ground and provide more value.

But Rosenthal’s logic is a bit flawed.

To start off–although this isn’t my biggest issue with the piece–Rosenthal makes an appeal to tradition saying that the Angels shouldn’t move Trout off center field because the Giants wouldn’t have moved Willie Mays off center. Not only is that a logical fallacy, but the Giants very well may have done just that if they had a similar outfield situation to the Angels.

The real issue here is whether or the Angels want to maximize Trout’s value or the team’s value. 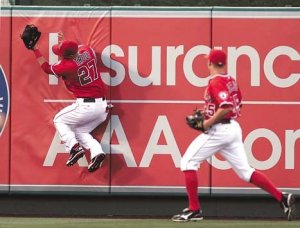 Did I mention Mike Trout is really, really good?

As a quick primer, Mike Trout was an exquisite defender last year, posting a 13.3 UZR (runs saved). Peter Bourjos was even better with a 16.3 UZR in 41% as many innings, second best among fielders with at least 200 innings played.

In a vacuum, Bourjos’ lack of power would profile him as more of a center fielder, and Mike Trout could easily profile as a corner outfielder given his power. But both can handle center field very well.

In Rosenthal’s article, he brings up a good point by an executive about positional value.

What this means is offensively, it doesn’t matter what position they play. Mike Scioscia should fill out his lineup card defensively solely based on defensive prowess, since this is the roster he is given. And if we’re operating under the assumption that Bourjos is better defensively, than he should be in center field.

It doesn’t matter who profiles better at what position. It’s too bad for Trout that his WAR is hurt by playing a less valuable position, but the team as a whole will be better off with Trout in left.

There’s been a similar situation on the other coast for the past four year, where the Yankees have actually been ignoring positional profiles. Curtis Granderson and Brett Gardner both played center field in 2009 before Granderson was acquired from Detroit, and the Yankees had left field and center field open for the outfielders.

Between the two, Gardner profiles more as a center fielder, and Granderson’s power allows him to profile as a corner outfielder, but the Yankees were fine with ignoring the profiles and playing Granderson in center with Gardner in left. Here’s the problem: Granderson is not a good center fielder.

Since they Granderson came to New York in 2010, he has a gross -15.8 UZR, while Gardner is sporting a league-high 56.4 UZR. Granderson has more positional value in center field, but he hurts his team’s value since he’s just not a capable fielder and Gardner is the alternative.

When a team has two capable center fielders on their roster, profiling can be a dangerous way to fill out the lineup. The two hitters will perform the same no matter which position they’re playing; defensive positioning should be determined by who is the best defender.