The NCAA Is Morally Wrong, But You Already Knew That

Yesterday was a big step for the NCAA. It didn’t make a great step, but things are better of than they were two days ago.

If you hadn’t heard before, the NCAA will not renew its partnership with EA Sports, meaning there won’t be an NCAA Football 15 video game.

The NCAA gave out a statement, saying “given the current business climate and costs of litigation, we determined participating in this game is not in the best interests of the NCAA.” Essentially, the NCAA is in danger of losing a couple lawsuits because they haven’t been paying student-athletes for their likeness, and the NCAA does not want to break its own rule of not paying student-athletes.

There are many issues with the NCAA; so many that I don’t have time to go over right now. But the one issue that really upsets me is paying athletes.

Or student-athletes, whatever the NCAA wants us to call them.

I’ve always believed that student-athletes should be paid. University of Texas football created $163 million in revenue in the 2011-12 season, yet they only paid their 85 scholarship athletes, the people who create that revenue, a total of $2.38 million. That’s just $28,000 per player in a currency they can’t spend.

The NCAA can do this because there is no viable path to the NFL other than college football, so they effectively run a cartel. Student-athletes have no union, so they can’t collectively bargain to be paid. The NCAA just gets to make up their own rules to say that athletes can’t be paid. 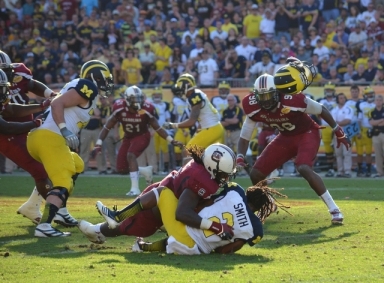 The Editor-in-Chief of the Vanderbilt Hustler can be paid $375 a month, but Jadeveon Clowney can’t get paid anything for devouring souls.

In what other workplace can someone put in full-time work–yes, college athletes have a full time job, and it’s sports–create billions of dollars in revenue, and not get paid a dime? We only accept this idea because it’s the way things have always been, which is never a great way to make decisions.

Imagine if the only way to get into Hollywood was to go to a three-year Movie University, where actors’ skills are honed. Student-actors work hard to make movies while at the University–blockbuster ones that gross hundreds of millions of dollars–but they aren’t paid because University officials say they’re amateurs, and the University keeps all the money.

No one would be okay with this.

Why are we okay not paying college-athletes?

Furthermore, a scholarship would be fine payment if it were just part of the player’s payment. Twice minimum wage isn’t remotely close to equitable payment for a player who creates millions in revenue. Imagine that Movie University actor getting paid $30,000 for starring in a Golden Globes-nominated film. That’s just not right.

NCAA officials often say that it’s the players’ choice and privilege to play football, but they have no other alternative. It’s like John Rockefeller talking to his workers before they unionized. Being paid for what you do is a basic tenant of this country, but college football colludes to not pay its cash cows purely for profits and tradition.

But as immoral and illogical as it is to not compensate student-athletes, it’s even more mind-numbing to me that they’re not allowed to take payment of any kind. They can’t get a cut of their jersey sales. They can’t be sponsors in commercials. They can’t get money for their likeness in a video game. They can’t even be treated to a $5 footlong sub at Subway.

The biggest jokes of all are the jersey sales and video game likenesses. Kansas, of course, doesn’t carry any Andrew Wiggins jerseys, but they suddenly got a large stock of #22 jerseys when he committed. The biggest sham, of course, is the video game, where Texas A&M suddenly got an amazing quarterback and South Carolina got a superhuman defensive end in NCAA Football 14. I thought that was pretty ironic because Johnny Manziel won the Heisman Trophy last year and has the same frame, number, and general skills as Texas A&M QB #2. Same for South Carolina’s Jadeveon Clowney and USC DE #7.

But there’s no way they’re related. The NCAA claims they’re not related.

I can live with athletes not being paid directly by their school if they are allowed to receive outside payments. At the very least, they need to be able to make money off their jersey sales and a hypothetical future video game likeness.

Fans may say that paying athletes will lead to an unfair system where rich schools get better athletes, but is that any different than Stanford, Duke, Vanderbilt, and Northwestern being handicapped because they have to hold athletes to a higher academic standard? A potentially polarized college football landscape is not a reason to bar student-athletes from being paid for their work.

But and schools get records removed and players still get suspended for taking free tattoos and getting a free lunch. Only recently have small loopholes opened up.

But until we make changes, these players are slaves to an arcane system based on reprehensible and indefensible rules.

Altogether eliminating NCAA video games was over the top, but God forbid we pay people for using their likeness in a multi-million dollar product. It sure wasn’t the best move, but it’s better than the old system.