The 2014 NBA Draft is the most interesting drafts in years for a variety of years.

It’s not just that there are at least four franchise-altering player atop the draft – there have only been about five of those going back to the 2009 draft – but there’s a load of really good players behind them. 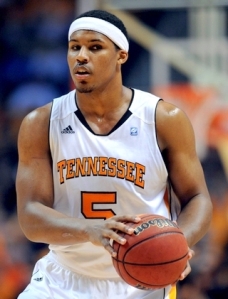 Most people aren’t using the Memphis native’s name in the lottery, but when you take a closer look, he’s actually one of the finest prospects in this class.

Stokes gets ripped for a lot of things unnecessarily. He’s a college junior. He’s too short. He doesn’t have great range.

But while those attributes are true, there are many reasons to like him.

The age concern is the most perplexing because it isn’t actually a concern. Although Stokes was a junior by class in Tennnessee, he actually graduated high school a semester early to attend UT as a 17-year old. He’s only 20 years old, two months older than Joel Embiid and Marcus Smart.

Age is a concern for draft prospects because analysts have found that age is one of the largest predictors for success in the NBA. The younger a player is, the more time he has to develop, and older college players often have inflated stats because they’re playing against less mature competition.

The height concern is another misnomer to me, even though Stokes measured out at 6’8.5” in the draft combine, which is below average for an NBA big man. He makes up for that lack of size with long arms (7’1.25” wingspan) and a good vertical (36”, 7th among power forwards).

Most importantly, Stokes is incredibly strong at a sturdy 263 pounds and nearly set a combine record with 22 bench press reps.

The shooting concern also bothers me because it doesn’t make sense. Stokes has never been a particularly good jump shooter, he’s a low-post scorer, not a stretch four. That’s like complaining that a point guard doesn’t have a post game.

If you see Stokes for what he is – a rebounding machine and low post threat – you’ll really like him. If you’re looking for a perfect, well-rounded player, there’s only a handful of those in the league.

Rebounding is one of the most easily transferable skills from college to the NBA, and that’s what Stokes thrived doing. He was third in the nation in offensive rebounding (4.2 per game, although he only trailed non-NBA prospects from Boise State and Morehead State).

He nearly led the league in double-doubles but was barely edged out by fellow First-Team All-SEC big man Julius Randle, a player whom he compares to closely. Randle is a half-inch taller with a 1.5” higher vertical reach, while Stokes has 1.25” longer wingspan and 2.5” wider hand.

It’s not just measurable, though, they’re both excellent low-post scorers and rebounders who put up nearly identical numbers:

The other player I see Stokes comparable to is Kenneth Faried. If nothing else, Faried was a rebounding machine in college, leading the nation with 14.5 boards per game in 2011. Of course, the Ohio Valley Conference is easier to rebound in than the SEC, but Faried had one transferable skill to the NBA and now is easily seen as one of the five best picks in the 2011 draft.

I’m not saying Stokes will be one of the five-best players in this loaded draft – 2011 had an admittedly poor draft – but he will be a very valuable player in the pros.

Also if I’m recommending a Tennessee player, that’s got to be as high of praise as it gets.

Because I’ve been pressed for time this week because of covering the College World Series from Omaha. You should check out my three game stories and other cool features including a surprise visit from Sonny Gray, ESPN telling Vandy fans to top whistling so loudly, and Brian Miller proposing to his girlfriend.

Instead of doing a fully fleshed out mock draft that will inevitably go haywire when the Cleveland does something stupid with the pick like draft Dante Exum (after he turned them down for a workout) or trade it for two ham sandwiches and a future second round pick, I’ll just give you my Big Board with a few comments on each player.

If you really want my mock draft here it is: Joel Embiid’s fall to the Hornets, P.J. Hairston will go at pick #24, and Stokes will go way, way too low. Happy?

1. Jabari Parker, SF, Duke
He’s going to be very good at just about everything other than defense, and there’s no way he flops.

2. Andrew Wiggins, SF, Kansas
It’s almost always good to bet on athletic freaks with basketball skills, even if his jump shot isn’t there yet.

3. Joel Embiid, C, Kansas
I had Embiid behind the other two before the foot injury, but I don’t think it will dramatically change his long-term potential.

4. Dante Exum, PG, Australia
Doesn’t it scare anyone that we know literally 2 things about this kid? His dad played with MJ and GMs have seen him live about once.

5. Julius Randle, PF, Kentucky
Dominant in college, and now he’s getting edged out by workout wonders. Randle will be clearly better 5 years from now.

6. Marcus Smart, PG, Oklahoma State
Whether or not he’s a true point guard, he’s going to be a very good pro because he’s tough and can score.

7. Aaron Gordon, PF, Arizona
He does everything well except for shoot, but as long as he isn’t a primary scorer on his team, he will succeed.

8. Noah Vonleh, PF, Indiana
I just don’t get the hype on him. Seems like a Ekpe Udoh bust part 2. But he is really athletic, so I’ll keep him this high.

9. Gary Harris, SG, Michigan State
I prefer Harris over Stauskas by an inch because he’s a much better defender.

10. Nik Stauskas, SG, Michigan
If you can get your jump shot off from anywhere and handle the ball, you can find a niche in this league.

11. Jarnell Stokes, PF, Tennessee
You didn’t really just skip to the bottom did you? Go read the intro.

12. Dario Saric, PF, Croatia
Even if he can’t come to the US for 2 more years, he’s a creative passer. If he can ever shoot consistently, watch out.

14. Elfrid Payton, PG, Louisiana-Lafayette
I can see why people like him, but I think people are trying to project Damian Lillard’s success onto him too boldly.

15. Rodney Hood, SF, Duke
Great size and a great stroke. If he continues to shoot like he did last year at Duke, he’ll be a steal.

16. Doug McDermott, SF, Creighton
Not a fan when he can’t defend small forwards or power forwards. Offensive versatility can only go so far.

17. Tyler Ennis, PG, Syracuse
Pure point guards are hard to come by now, and he could be the steal of the draft if he finds a consistent shot.

18. Adreian Payne, PF, Michigan State
An older prospect, but he can defend the paint some and really shoot the mid-range shot.

19. P.J. Hairston, SG, North Carolina
Character issues don’t matter to me much when a player shoots the way Hairston does.

20. T.J. Warren, SF, NC State
Warren has a knack for scoring even without a great jump shot. Low ceiling but high probability.

21. Zach LaVine, PG, UCLA
I get that he is an athletic freak, but I don’t really see discernible NBA skills, which is an issue.

25. Shabazz Napier, PG, UConn
I just don’t see much projection left in Shabazz, but he’d be a solid rotation player.

26. Mitch McGary, C, Michigan
If he didn’t injure his back last year, he’d probably be a mid-first rounder. I like to bet on injured talent.

27. Jordan Adams, G, UCLA
He can score. That’s a pretty good skill to have if you want to make the NBA.