The debate has been going on for weeks now. Which team is better: the ’92 Dream Team or the 2012 team?

Now this debate is dumb for several reasons. One, we’ll never know which team is better since they can’t actually play each other, and two, it’s just a stupid debate.

But because it’s a stupid debate, I’m going to use up 827 words to throw my opinion into the ring.

Team USA won the gold medal Sunday, reaffirming that the team with 12 of the 41 NBA players in the Olympics was the best. Now no other country had more than six NBA players, which helps explain why the US won their eight game by more an average of over 32 points.

The original Dream Team, however, won their eight games by an average of nearly 44 points, so they’re clearly the better team, right? Well, not exactly.

The Dream Team had eleven NBA players plus Christian Laettner, but the rest of the world barely had any. I’m talking just Drazen Petrovic, Toni Kukoc, Sarunas Marciulionis, and Stojko Vrankovic. (Shockingly, I didn’t make up any of those names)

But that ’92 team wasn’t just dominant because they had more NBA players than the rest of the countries combined; the other countries feared playing them. And if they didn’t fear the Dream Team, they were just excited to be on the same court.

Conversely, international players were calling out the 2012 Dream Team left and right. Marc Gasol called out the team first before the Olympics even started, and Nicolas “Nutcracker” Batum joined in during the Summer Games.

Just because one team was revered and one team wasn’t doesn’t prove one was better than the other. 82% of RottenTomatoes.com users liked the first Twilight movie compared to 33% of users liked MacGruber, but I’ll always maintain that MacGruber is the far better movie.

To be clear, I do think the 1992 team would beat the 2012 team. Probably. But a lot of that has to do with the fact that the current Dream Team is missing a four key players. Give me Dwight Howard, Derrick Rose, Dwyane Wade, and Chris Bosh, and this is a different conversation.

Athletes have gotten much better over time. Jesse Owens ran his historic 1936 100 meter dash in 10.3 seconds. He would’ve finished a distant 8th in the 2012 Olympics because Asafa Powell somehow ran an 11.99, well beyond 7th place Richard Thompson’s 9.98 time.

Simply put, today’s athletes are bigger, faster, and stronger than the athletes of yesteryear.

Let’s take a look at the 1992 roster vs. my updated 2012 roster to include injured Olympians.

We forget that the Round Mound of Rebound was Kobe Bryant’s height. Karl Malone? Just bigger than LeBron, but far slower.

Not only that, but Magic was 32, and Bird was on his last legs at the age of 35. Even Patrick Chewing Ewing and John Stockton were 30. 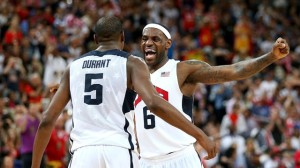 Kevin Durant scored at will all Olympics, and LeBron reinforced that he is the best player in the world. Karl Malone can’t guard LeBron. Charles Barkley can’t guard Kevin Durant. There’s clearly going to be a lot of scoring in this game, but I think the younger, more athletic, quicker team will prevail.

I know it’s blasphemy. I know it’s heresy. Michael Jordan’s star has grown and grown since he retired nine years ago until he’s reached a god-like pedestal,. But one player can only do so much with dozens of Hall of Famers playing in one game.

Michael Jordan is the greatest, but in my mind, he’s not enough to overcome a more athletic, better shooting 2012 Dream Team.