Week 14 Picks. Too Lazy for a Better Name.

BUCCANEERS (+3.5) over Saints
One of the sneaky good teams as a home underdog? I’ll take it.

Jaguars (+7.5) over DOLPHINS
The Jaguars are terrible, but the Dolphins aren’t worth giving up more than a touchdown.

Chiefs (+4.5) over RAIDERS
Ain’t nobody got time for that.

FALCONS (-1) over Giants
The Falcons are being exposed as a bit weaker than their record would have you think, and this is typically the time of year the Giants catch fire. So I’m going with Atlanta!

Vikings (+2.5) RAMS
Adrian Peterson is far and away the best player on the field. I’ll take him and the points.

Redskins (+4) over BROWNS
It’s going to be an interesting debate over how the Skins should handle Kirk Cousins. He’s playing better than Kevin Kolb and Matt Cassel did in their short auditions a few years ago, and they each fetched a second round pick plus. RG3 may never be healthy for a full year, but the Redskins could use a few more pieces if they choose to sell off Cousins.

Lions (-6) over CARDINALS
What do you think Brian Hoyer has to do to get some playing time? He’s benched behind Ryan Lindley and John Skelton. Lindley’s completion percentage is 48.3% and his quarterback rating is 42.6.

Panthers (+3) over CHARGERS
Classic Panthers. They’ve started 2-8 the last two seasons under Cam Newton, and they won 4 of their last 6 in 2011. They’ve won 2 of the last 3 this season with just San Diego, Oakland, and New Orleans left on the schedule.

Lions (+1.5) over TITANS
The Titans still aren’t good, and I’m most certainly not giving points to pick them.

Packers (-3) over BEARS
Without Brian Urlacher and Tim Jennings, the Bears just don’t look that good. Unfortunately, they’ll probably miss the playoffs for the second season in a row because of late-season injuries.

Broncos (-3) over RAVENS
The Broncos are one of the five best teams in the league, and the Ravens are overrated because people still think they have an elite defense. Which the don’t. 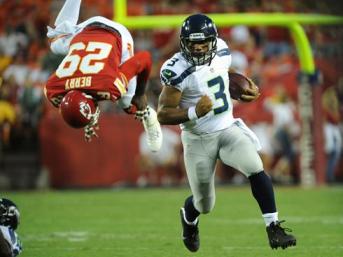 I’m not sure if Russell Wilson is great, but he’s definitely great against bad teams.

Colts (+10.5) over TEXANS
Don’t give up double digit points when it’s two good teams and the favored team got whacked by 28 points the week before.

Seahawks (-4.5) over BILLS
The Seahawks could score one twelfth the points they scored last week and still cover this line by four.

PATRIOTS (-4) over Niners
I’m just going to copy and paste my writeup for the Patriots/Texans game last week: “This is going to be the game the whole NFL recognizes the Patriots as the best team in the league. And there’s nothing you can do about it.”