Last week I improved, picking eight of the fourteen games correctly. But because I missed the Cook Out Drive-Thru Lock o’ the Week for the seventh time this year (the Texans lost by a half point! A half point!!!), I lost 35 apples on the week.

So instead, huge Giants fan and noted ridiculous person Cristina Dafonte will be making my picks this week. All the analysis is hers. Enjoy.

Vikings (+12.5) over SEAHAWKS
Seattle’s going to win this game because have you ever been to a home game in Seattle? It’s miserable and they’re terrible humans. The fans are so loud and annoying and awful. Ooh that’s a lot of points, but still the Vikings suck. I think they’re going to win but not by 12.5 points

Raiders (+7) over TEXANS
Texas is going to win by 3 because the Raiders lost to the Giants by 4, and how embarrasing is that?

DOLPHINS (+1.5) over Chargers
You can decide a reason for that one. Am I supposed to know any players on these teams? Oh it’s in Miami. That’s why.

Redskins (+3.5) over EAGLES
Oh Redskins because fuck the Eagles! I hate the Eagles, but not as much as I hate the Cowboys.

BUCCANEERS (+1.5) over Falcons
I’m going with the Bucs because you have to pick an upset every once in a while.

BEARS (-3) over Ravens
Because Bears are stronger than Ravens. I don’t have anything else to say about this game. I don’t care who wins TBH.

BENGALS (-6) over Browns
Sure six sounds like a good number. The Bengals are 6-4 and the Browns are 4-5.

PANTHERS (-2.5) over Patriots
Tom Brady may be the best-looking quarterback in the NFL with the hottest wife, but you can’t have it all.

Colts (-3) over TITANS
Oh yeah, I’m picking the Colts because because the Titans lost to the Jaguars, the only team worse than the Giants.

Lions (-2) over STEELERS
I don’t really know who either of these teams are. Except the Steelers. Because they wore those really awful uniforms one time. 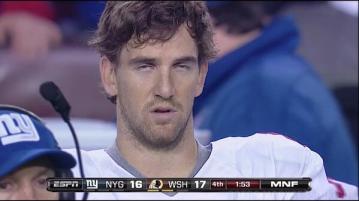 We believe in Eli Manning.

GIANTS (-5) over Packers
We believe in Eli Manning.