I gave up my picks last week to friend of the show Cristina Dafonte, and whaddya know, she did better than I’ve done most of this year. To add insult to injury, it was my seventh most read article of all-time, the most since my Top 20 Kanye West songs post.

But since she only went 7-6-2 and made me 10 apples, and I still have 335 apples to make up (plus I’m stubborn), I’ll be reclaiming my picks this week. If and when I do worse than her this week, she’ll be back for more picks. Don’t worry.

Also, I’ve received at least one question about what each category of games means. Check out my first picks of the year, which gives a translation for the apple value of each of my unofficially official sponsored games.

Without further ado, here are my Week 12 NFL Picks. Home teams in CAPS.

Buccaneers (+9) over LIONS
Quiz time! Is Bobby Rainey a) the stage name for a Seattle weatherman, b) one of the featured artists on Rick Ross’ upcoming album Mastermind, or c) the Buccaneers new running back? Well, this is under the Bucs game, so hopefully you got this one right. It’s c.

Vikings (+5) over PACKERSQuiz time! Is Kevin Cossom a) a Kevin Costner impersonator available to perform at Bar Mitzvahs, b) one of the featured artists on Pusha T’s new album My Name Is My Name, or c) the Packers’ new backup to quarterback Scott Tolzien? Ha! Trick question! He’s actually a singer!

Bears (+1) over RAMS
Two backup quarterbacks? It’s your Ain’t Nobody Got Time For That Game of the Week.

RAIDERS (-1) over Titans
The Titans had an extra week of preparation, but is that really enough time to prepare for Matt McGloin and the Raiders?

Cowboys (+2.5) over GIANTS
I don’t have anything to add to this game other than Turnt Up Tina probably would have picked the Giants and made this her Cook Out Drive-Thru Lock o’ the Week. So I’m going to inevitably miss this one and forfeit my picks to her next week.

RAVENS (-3.5) over Jets
I’m 1-9 picking Jets games this year, including missing the last 8, so take this pick with a full shaker of salt.

Broncos (-2.5) over PATRIOTS
I feel dirty picking against the Patriots getting points at home, but the Broncos are just such a better team right now. And to address the Gronkroversy from Monday night, yes he was definitely interfered with, but there’s no way he could have gotten back to the ball before Lester did. That’s it. Go Panthers!

Saints (+9.5) over FALCONS
This line made me sad because this series used to be so fun when teams had good quarterbacks. 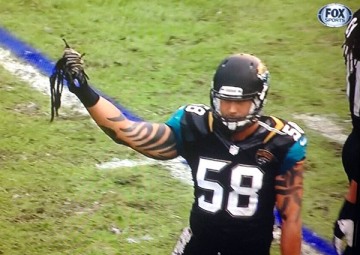 We’ve really glanced over the fact that Andre Ellington had multiple dreadlocks pulled out of his head. How was he not writhing in pain on the ground?

Colts (+2) over CARDINALS
Earlier this week, Trent Richardson said, “I’m not frustrated at all because I think I’ve been playing good.” I’m not sure which is more embarrassing: his perception of good play or his Alabama-quality grammar.

CHIEFS (-5) over Chargers
Alex Smith being 28-6-1 in his last 35 games has to be one of the dumbest stats brought up all the time. Smith is a competent quarterback who happens to play on teams loaded with Pro Bowl payers. However, it’s a perfectly applicable stat when he plays against bad teams at home like the Chargers.

Steelers (+2) over BROWNS
The Cleveland Indians are selling Terry Francona 2013 AL Manager of the Year shirts. That’s the kind of thing Cleveland sports fans have to get excited about.

Panthers (-4) over DOLPHINS
Minus a DeAngelo Williams fumble and pre-Riverboat Ron coaching in Buffalo, the Panthers would be 9-1. Yeah, almost every team has moments like these each season, but this Panthers team is really good and really fun. Hop on the bandwagon!