To be perfectly honest, it hasn’t been the strongest start of the season making picks. But have no fear, we’ve been here before!

The point of the story is don’t get worried by my tough beginning to the year. I’m on a hot streak. I got 50 apples last week.

Lions (+7) over PACKERS
I feel like every Packers line gets boosted a point or two because wow Aaron Rodgers is the number one fantasy QB!! Their defense is porous (5th-worst in yards per game and 6th-worst in points per game) and the offensive line is shoddy at best with Brian Bulaga out for the year. The Lions just put up 40 points on the Bears, I think they’ll be able to cover a touchdown spread.

FALCONS (-10) over Jets
For all the high hopes the Falcons had this year–I picked them to go 12-4–they’re 1-3 to start the year. No way they blow this one on Monday Night Football. Unless, you know, this game comes down to a seven-point deficit with a minute left and the Falcons have the final drive.

Saints (PK) over BEARS
The Bears are 3-15 when Jay Cutler throws multiple interceptions and 34-9 when he doesn’t. That’s not even considering his 26 fumbles in Chicago. The Saints are 5th in the NFL with 10 takeaways.

Texans (+6.5) over NINERS
San Francisco safety Donte Whitner has filed paperwork to change his last name to “Hitner” by dropping the letter W. This is not okay. Texans it is.

Ravens (+3) over DOLPHINS
Ray Rice hasn’t had a game with more than 36 yards. I know that well as his fantasy owner. But you can’t bench him at this point; you just have to ride out playing him like I’m riding out picking these sad, sad Ravens week after week.

Chiefs (-2.5) over TITANS
I think the Alex Smith perfectly fits this Chiefs team. He’s pretty good, and you could definitely do better, but, hey, he won’t make any terrible, self-destructive mistakes.

BROWNS (-4) over Bills
The Bills aren’t beating a semi-competent team unless they get five interceptions. Brian Hoyer is more of a three-interception quarterback in my mind. 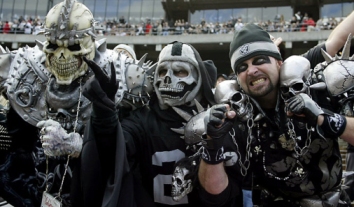 I can’t believe I might regret associating with these fans.

Seahawks (-3) over COLTS
Is it possible that Russell Wilson could be the best QB from the 2012 draft? Nope, but his team is leagues better than Andrew Luck’s Colts.

Eagles (+2) over GIANTS
What a great excuse to post this video.

Panthers (-2) over CARDINALS
The Panthers have the 6th best DVOA in the league this year–better than the New England Patriots. That sounds crazy, but they were a DeAngelo Williams fumble away from beating the Seahawks and a terribly coached drive away from beating the Bills. They deserve a better spread than two points in Carson Palmer’s home.

Broncos (-7.5) over COWBOYS
At this point, I’m not really hesitating on Broncos lines in the single-digits. Somehow I’ve managed to pick against them three times this year and lost every one of those picks.

Patriots (+1.5) over BENGALS
It’s an early Eggsmas Miracle!  Two straight Patriots games where I get points and this time they’re playing a team that couldn’t handle the Browns!